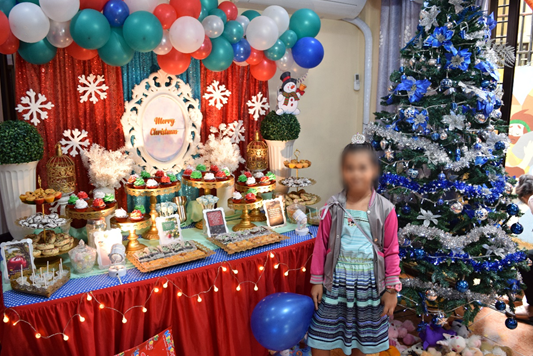 Looking at Rhea, you would assume she is a normal 10-year old. She grew up with her family in the southern part of Cebu. Her mother stayed home to care for her and her 2 siblings, and her father is a construction worker. According to her mother, Rhea was very sweet and affectionate. However, there was another side to Rhea. There were times when she was aggressive and irritable. She quarreled with her peers and even stole from her classmates. Her mother couldn’t understand these negative behaviors.

She was shocked when Rhea disclosed that she was allegedly sexually abused by 6 different men, including her own uncle, since she was about 7 years old. Her mother could not believe it could’ve happened because she claimed she was always around Rhea. However, she did realize that the uncle seemed to provide special attention to her. He would bring her candies and chocolates, bought her things, and other times gave her money.

According to reports, Rhea did tell her mother about the abusive incidents, but her mother didn’t believe her. She said that Rhea had the tendency to make-up stories. Rhea was referred to Department of Social Welfare and Development (DSWD) Home for Girls, and subsequently to Restore for therapy in June 2019. She manifested some problematic behavior such as not eating well, poor hygiene, throwing tantrums, assaulting other children, uncontrollable crying, and nose bleeds when angry or distressed. She was also reported to hallucinate, act out inappropriate sexualized behavior, and suffer from flashbacks and nightmares. The lack of sleep triggered aggressive behavior the next day.

At Restore, Rhea was enrolled in the intensive one to one sessions and group therapies. In the first few meetings, she did not participate in the conversations and activities. With consistent and constant prayer, Rhea has shown significant improvement in her behavior. She now shows excitement in the activities, eagerness to learn, engagement in conversations, and regularly meets with the Restore staff assigned to her. The aggressive behavior and cursing decreased.

Restore has also worked with her family through therapy sessions and the Child and Family Team meetings. Her mother expressed that the therapy sessions and meetings have provided her a better understanding about Rhea’s behaviors. Rhea’s parents realized that safety and emotional security are important in raising emotionally healthy children. Regular communication and spending quality time are integral in strengthening their relationship as a family. As of today, Rhea and her family continue to receive mental health services through Restore. Her parents are very supportive of her and eager to learn more to enhance their parenting skills. The services they receive not only benefit Rhea, but also the lives of her siblings. Hope has been restored for their family.