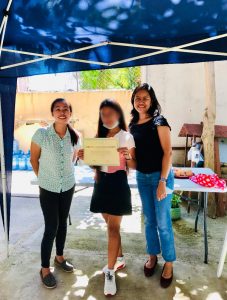 Angelie was an energetic 15-year-old who was full of life and optimism despite living in poverty. She lived in a small town in rural Cebu with her parents and younger brother. Angelie’s father is a farmer, and her mother works as a gardener at a local mountain resort. At school, Angelie was an above-average student who was focused and determined to excel. She loves cooking and baking, and dreams of being a chef. This vibrant 15-year-old’s life turned bleak in June of 2017.

Angelie was at a sleepover with a cousin when she was sexually molested. She was woken up by a hand fondling her breasts and lower abdomen. Angelie clearly recalls recognizing the uncle-in-law’s face during the encounter. Her initial reaction was to disclose and report her experience. However, the uncle-in-law threatened to harm her parents if she reported the abuse.

She didn’t immediately experience the aftermath of the horrifying event. It wasn’t until three years later that she developed symptoms of Post-Traumatic Stress Disorder (PTSD). She began to have intrusive recollections of the event. She suffered from sleeping problems, recurring nightmares, chronic fear, and unpleasant thoughts. She also exhibited physical responses such as trembling, tearfulness, rigidity, and tightness in her chest. She also constantly worries about her family’s safety because the perpetrator currently lives in their neighborhood.

On November 1, 2020, Angelie confided in her cousin and afterwards to her parents. She was immediately transferred to the care of an aunt in another barangay and has been living there for almost three months for her protection. Her parents frequently visit and are supporting her through her journey to healing.

When Angelie arrived at Restore, she was struggling with symptoms of PTSD. She began weekly individual therapy, where she was able to learn healthy coping strategies to address her PTSD symptoms. She welcomed counseling and therapy. Her openness to share her struggles and being receptive to learning new coping skills facilitated her recovery. Angelie’s parents were extremely supportive in the therapeutic process as well. They travelled to Cebu City, taking time off regular work to accompany her for therapy sessions. The local barangay GAD officer volunteered to provide transportation to and from Restore. Some of Angelie’s relatives also regularly joined the Child Family Team meeting conducted every month. With support to process her trauma, Angelie began to heal from her psychological injuries.

Support from a stable family and self-awareness (of strengths, triggers, and areas of struggles) expedited Angelie’s mental health intervention treatment plan. The process usually takes at least six months to a year, but she was able to complete it in four months. Her experience is an example of how familial support, community involvement, and a holistic approach to therapy are vital aspects of healing.

Angelie, supported by her parents, has filed a case and pressed charges against the uncle-in-law. They are now waiting for a warrant of arrest.