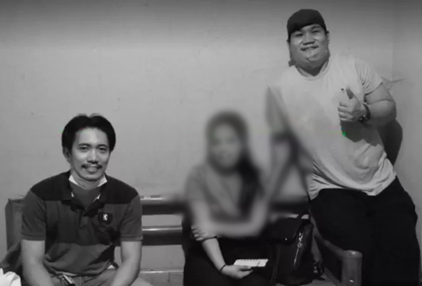 Aira is a resilient single mother. She is hopeful, hardworking, and determined to reach her goal of earning sufficient income that would allow her to live with her four children under the same roof..

Aira and her sister were abandoned by their parents at a very young age. They moved from house to house hoping someone would provide financial support for their education. “Life was very hard every time my sister and I were bullied in the community, and we had no parents to protect, love and care for us”, said Aira. Her older sister was the only person she considered to be her family.
At the age of seven, her most dreaded fear came true. Their relatives separated Aira from her sister, her only family. They took her to a shelter where she was physically and emotionally abused. She ran away from the shelter at the age of 12 and looked for jobs to support herself. She was vulnerable and impressionable. Her friends influenced her to use illegal drugs. She was involved in damaging relationships. When she was 16 years old, she was manipulated and sexually abused by her employer. She was so afraid and looked for someone to defend and protect her. She decided to seek help from her best friend. However, it became her worst nightmare. Her best friend took advantage of the situation and raped her. She felt ruined. hopeless, and deeply wounded. She was scared to seek any further help. She gave birth to a son from that abuse. When the baby was three months old, the perpetrator’s family took her baby away. Their degrading words caused deeper wounds and trauma. “I could not describe the pain I had felt at that time. I had no family or anyone to support me,” said Aira. On her own, she continued to strive and move forward from her dark past.
A few years later, she went to Manila to work and met another man. Though she was afraid of having a relationship, she fell in love with him and had a child with him a year later. (He is now ten years old and currently resides in a shelter.) Initially, their relationship seemed perfect. She felt love and support from him. They had a successful business and were able to build a house. However, Aira’s boyfriend became addicted to illegal drugs. He became violent and unreasonably jealous with other men that Aira interacted with. She and her son (six years old at the time) received severe beatings. The severity of the physical abuse escalated and it reached a point where she had to beg him for her life for the sake of her child. That incident forced her to escape. She and her son arrived in Cebu. She later discovered that she was pregnant. With no financial resources or family, Aira had to stay at a shelter, while her son was transferred to a boy’s home. After she gave birth to her third child, her daughter was transferred to another long-term home. She is now a three year old residing currently at shelter.
The shelter helped Aira to recover from her dark past and allowed her to continue her education. She was given a chance to take a housekeeping vocational course. However, after a year, she met another man while she attended the vocational school. A few months later, the relationship turned sour as her boyfriend and his family found out about her past. He blackmailed and threatened that he would expose her secrets to everyone if she did not concede to his demands. He continued to manipulate and abuse her until she became pregnant again with twins. (now 1-year old and currently at the shelter). Aira managed to escape from that abusive relationship because of the support she received from the staff at the shelter.
Her traumatic past consisting of abandonment and repeated abuse (verbally, physically, emotionally, and sexually), put Aira at high risk for suicidal thoughts, anger issues, low self-esteem, poor decision-making skills, and panic attacks. The government shelter where she was staying referred her to Restore on July 1, 2019. The team conducted intensive, individualized therapy and rehab sessions with her. They created a safety plan that allowed them to properly and immediately respond to her in times of emergency.
Aira gave birth to twins on December 4, 2019. She transferred to transitional housing where she could be with her babies while looking for a job. Since Cebu was placed on lockdown in March 2020 due to the pandemic, Aira had no choice but to stay inside the shelter for seven months. What Aira thought was a good situation at first, quickly became a great challenge for her. She could not seek help and support from outside because of the community quarantine. She had to take care of her newborn twins and her three – year-old son alone. Lack of rest and sleep resulted in physical and emotional stress which made her vulnerable to suicidal thoughts.
Restore was able to assist Aira move from the temporary housing to a rental house while she looked for a job. Restore also connected Aira to a local church’s women’s ministry. They warmly welcomed and surprised her with gifts as she tried to rise again and recover from her painful past. They visited, prayed and discipled her through the study of God’s word at least once a week. “I am so grateful because I felt the love of the people from church. I’m also thankful to Restore because without them, I wouldn’t know that there is hope for me. Restore guided me and taught me healthy coping skills so that I can continue to move forward. I now feel better compared to before, “said Aira.

Aira still struggles with anxiety and worries about how she will provide for her children when they are reunited with her.However, she is now able to manage her negative emotions.She redirects her thoughts to her new business of selling detergent and dishwashing liquids.She is aware of the difficulty of her situation and thatthe road to healing is a long process, but Aira is now determined to persevere. Her love and affection for her children are fueled by the hope that there is healing and restoration for her.